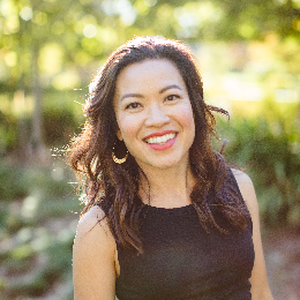 I'm a writer, editor and journalist based in California's Silicon Valley. 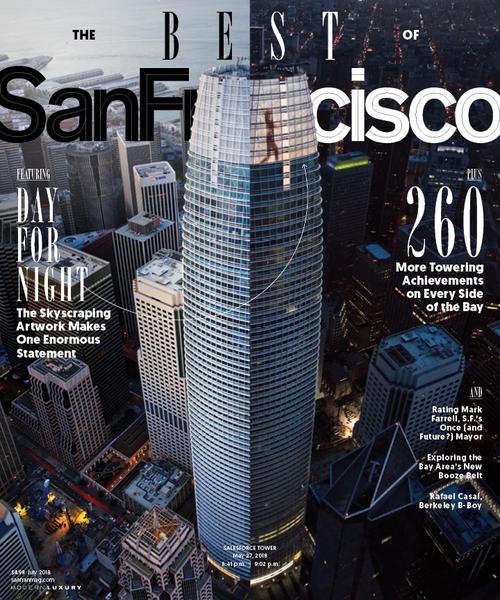 The ultimate places to eat, shop, play and get top-notch services in the South Bay. 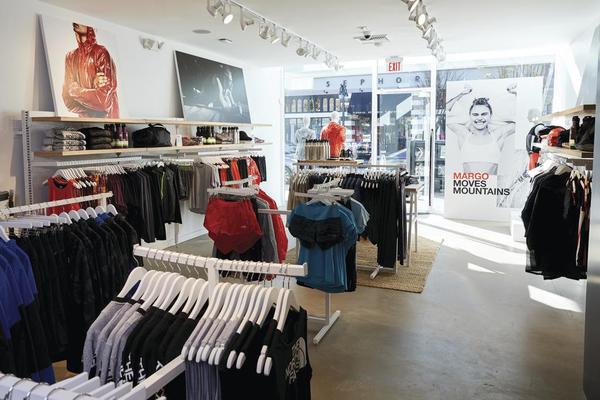 There’s a fresh addition to the bustling Burlingame Avenue retail district: The North Face’s 1,890-square-feet run and train concept store, stocking a curated selection of men’s and women’s footwear, accessories and apparel in a sleek and modern space. Focusing on its long-distance running Flight Series and Beyond the Wall indoor climbing gear, the specialty store is a first for the brand in Silicon Valley. A departure from its traditional design, the new outpost incorporates bold black-and-whi 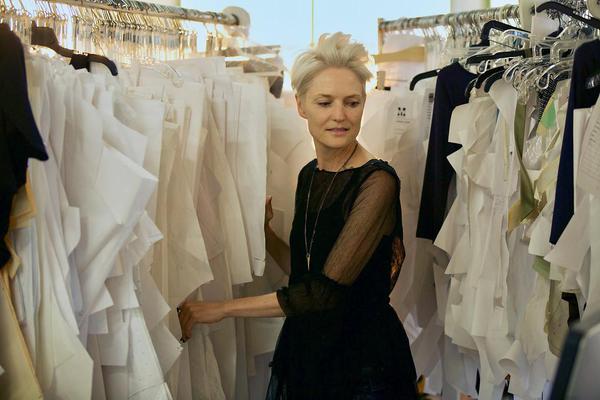 Dressed in head-to-toe black with her signature cropped blond ’do on a recent trip to the Bay Area, Malia Mills’ edgy New York style belies the island upbringing that launched her enduring career in swimwear design. Born and raised in Honolulu, the 51-year-old pioneer revolutionized the industry by launching her eponymous line of “bra-sized” bikinis in mix-and-match separates — a breakthrough 25 years ago for women looking for a more precise fit than the typical S, M, L options. Swimwear obsess 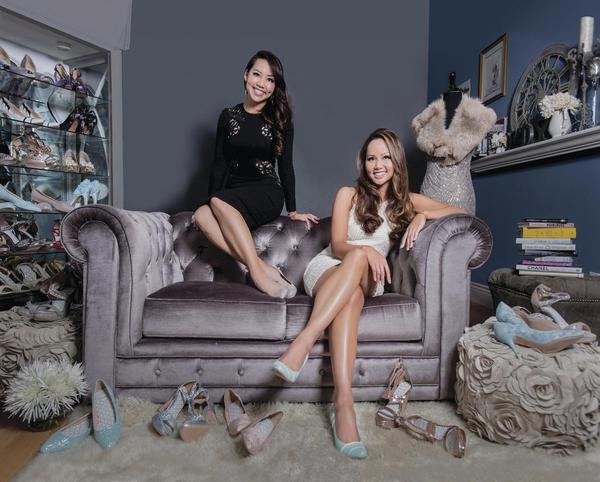 At 37 years old, twin sisters Emily and Jessica Leung have already survived their midlife crises. Three years after co-founding vintage-inspired comfort-wedding-shoe business Hey Lady in 2009, the sibling entrepreneurs pressed pause on their plans when Jessica discovered she had end-stage nasopharyngeal carcinoma, a rare type of head and neck cancer, and was given a zero percent chance of survival. “I think everyone should have their form of a midlife crisis where they discover their meaning of 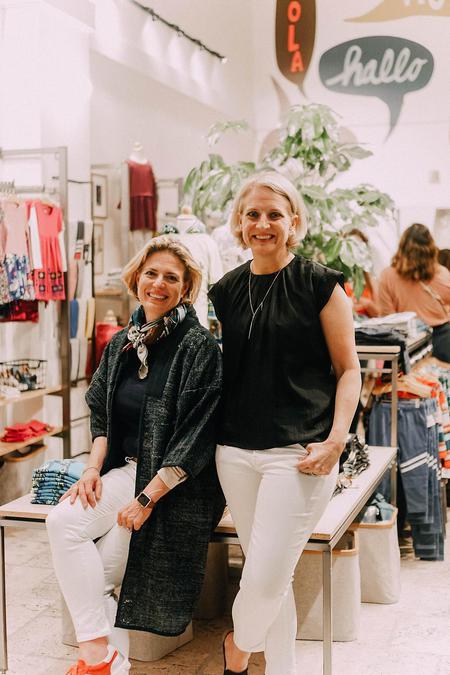 Bucking the massive store-closure trend and declarations that retail is dead, San Francisco’s Tea Collection has opened its first brick-and-mortar boutique in San Jose’s tony Santana Row — 16 years after the launch of the travel-inspired children’s wear brand. “The timing was right, the space was right, everything kind of lined up and we’re finally ready,” says Emily Meyer, chief creative officer who started Tea out of her Palo Alto apartment with co-founder Leigh Rawdon in 2002. “We have enoug 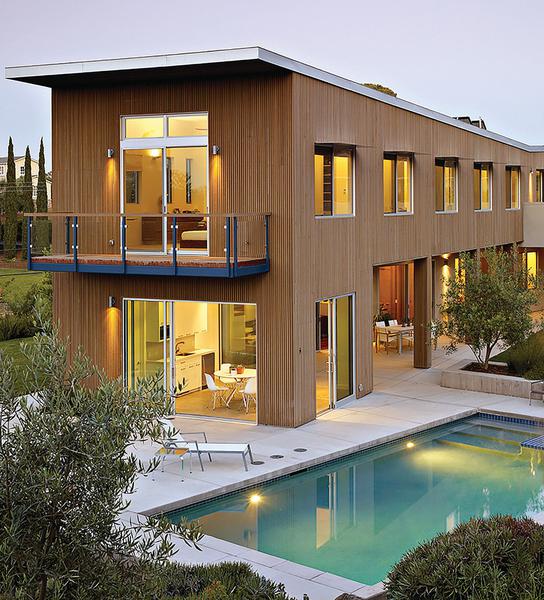 The 2018 Best of Silicon Valley Awards

From under-theradar services (orchid boarding) to over-the-top splurges (a $4,000 shot of scotch)—and things in between (bespoke bikes and bling)—our annual roundup showcases the area’s standout offerings. 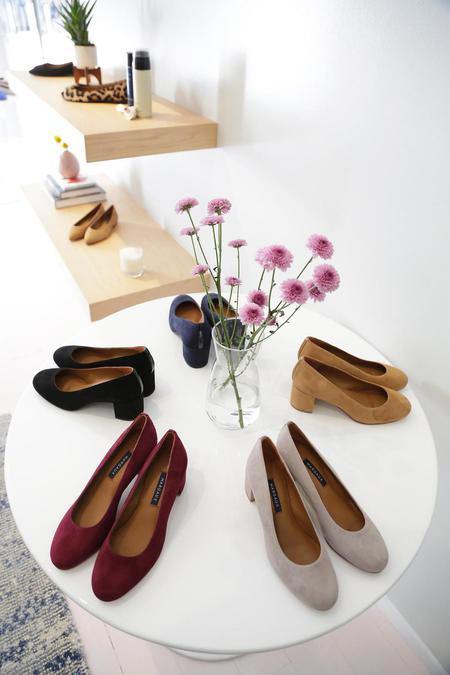 For women on the perpetual hunt for that fashion unicorn — chic yet comfortable shoes with a glove-like fit — the Margaux pop-up store on Fillmore Street may finally be the answer. Looking to solve a sartorial problem they experienced as working professionals, New Yorkers and former Harvard College roommates Alexa Buckley and Sarah Pierson launched Margaux in 2015 as a direct-to-consumer brand of elegant, practical ballerina flats offered in bespoke and standard sizing. “We had to do this terr 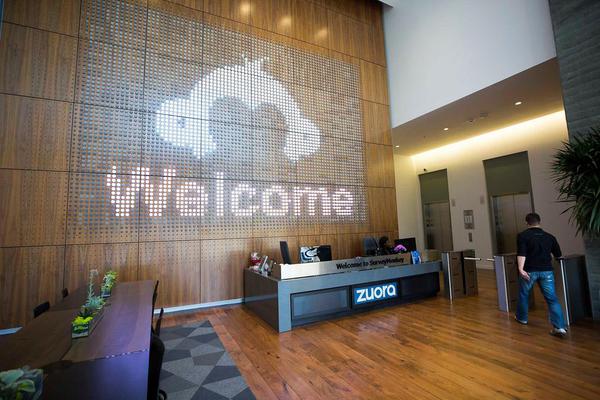 At SurveyMonkey’s sprawling new San Mateo headquarters, droves of tech workers spilling out of the adjacent Caltrain station, hopping off commuter bikes and walking to work are greeted by a 900-square-foot interactive light installation that casts a warm glow from the lobby of the three-story building’s curved glass facade at 1 Curiosity Way. Created by San Francisco’s Future Cities Lab, the wall-mounted artwork, reminiscent of a simple dot matrix, alternates between animated visualizations of 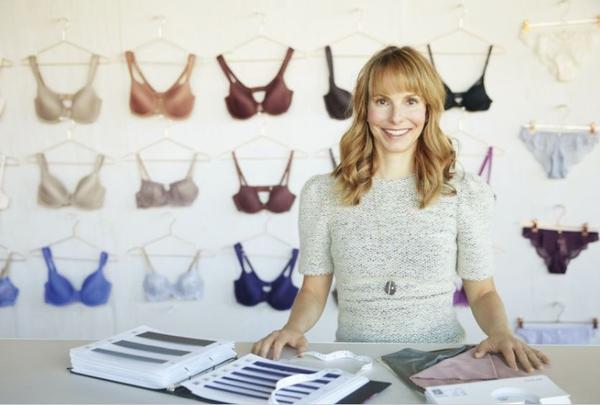 Heidi Zak Spector is constantly thinking about your bras—so that you don’t have to. 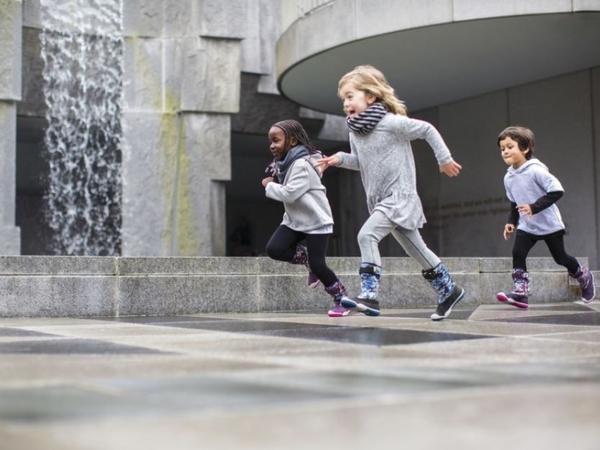 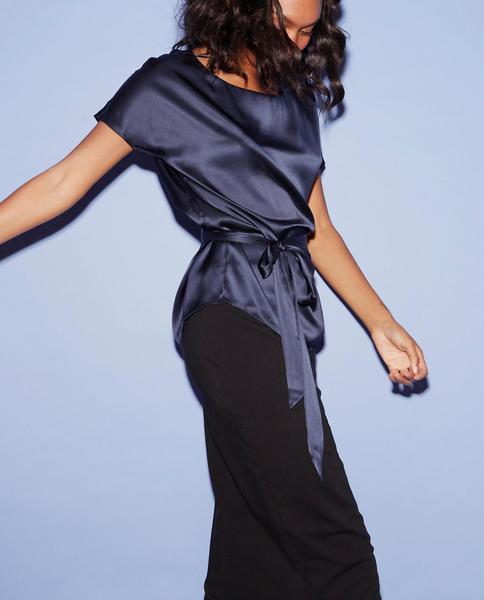 After seven years as a merchant and director of e-commerce apparel at fast-fashion chain Charlotte Russe, Margaret Coblentz decided it was time to create her own luxury womenswear label with a decidedly opposite approach to clothing. Named Frances Austen — after Coblentz’s great-aunt Frankie and great-grandmother Fran, as well as her own favorite author, Jane Austen — the nine-piece capsule collection debuted in September. It offers silk camisoles and blouses and luxurious cashmere sweaters in 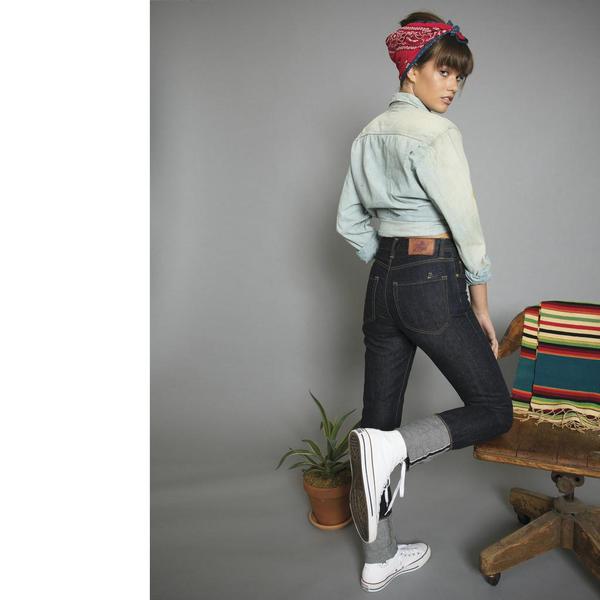 A Raw Talent for Selvedge Denim

Kiya Babzani’s obsession with raw selvedge denim began at 19, when, on a visit to a friend in Hong Kong, he wandered into a boutique in the bustling Central district and purchased his first stiff, dark pair of Yamane Deluxe five-pocket jeans. “I was really into rockabilly music and dressing the part—the cued jeans, the rayon shirt, the white tee underneath, the pompadour, the whole thing,” says the 39-year-old, who was born in Iran and raised in San Mateo and San Francisco’s Outer Richmond. Whe 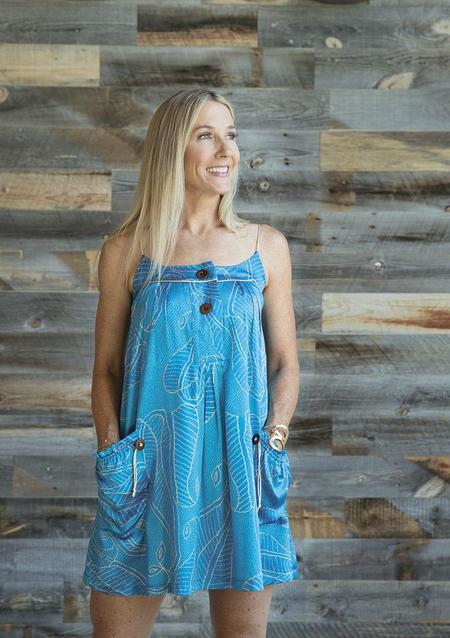 While many new moms try to sneak in precious little sleep while caring for their newborns, Erin Wetzel was tightening and toning her way back to her pre-baby physique. A lifelong athlete who played competitive sports throughout high school and college, the Menlo Park fitness enthusiast began sweating it out at The Dailey Method—a mere eight weeks after giving birth to her now-8-year-old son, Wyatt—and got hooked on the ballet barre-based workout. “My husband jokes that, when I first met him, I h 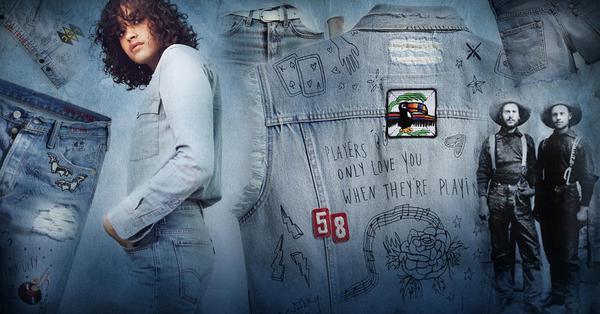 Levi’s & other denim makers look ahead

Is it possible to be both a 164-year-old heritage brand and a fashion disrupter? Jonathan Cheung, Levi’s head of global design for men and women, thinks so. Just ask him why the San Francisco denim giant born out of the California Gold Rush endures, and he’ll relay a litany of reasons why the inventor of the first blue jean has for decades remained an international powerhouse that consistently breaks the mold. From its foray with Google into wearable tech for its “smart denim” trucker jacket 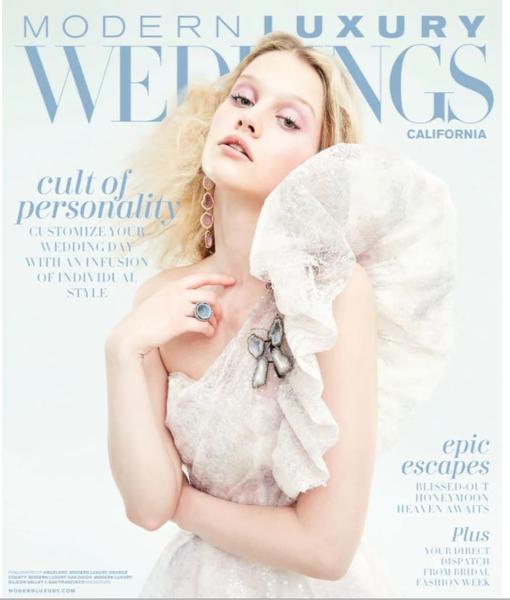 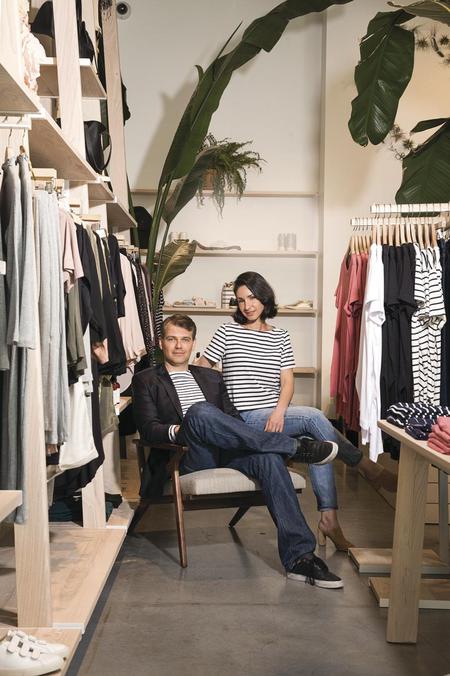 If ever there were a place where an engineer and a scientist could launch a posh eco-fashion company at the forefront of the sustainable clothing industry, it would be Silicon Valley. Not that Christoph Frehsee and Linda Balti—the husband-and-wife team behind womenswear brand Amour Vert—could have predicted this would be their future seven years ago, when they first began crafting a business plan from their tiny one-bedroom apartment on the Stanford University campus. “At the beginning, it was v 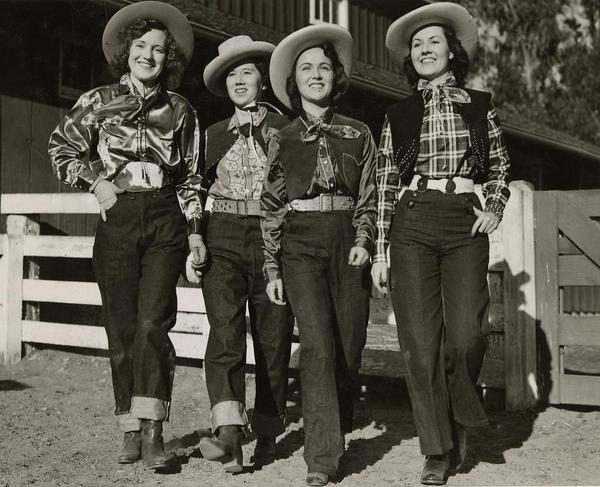 May 20, 1873, could well be considered one of the most noteworthy dates in fashion history. Known as the birthday of the original blue jean, on this date Levi Strauss and business partner Jacob Davis received a U.S. patent for work pants reinforced with copper rivets, a design innovation intended to strengthen the humble "waist overall" worn as workwear by pioneers of the West. Renamed the 501 jean in 1890, the iconic American garment has evolved throughout the centuries from utilitarian unifo 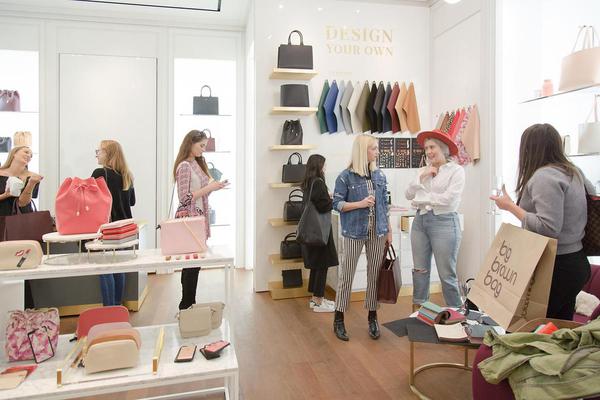 Design your own bespoke handbag at Mon Purse in San Francisco

Sometimes the most brilliant of ideas strikes in the unlikeliest of places. At least that’s what happened to Lana Hopkins, CEO and founder of Australian accessories brand Mon Purse, which opened its first West Coast boutique on March 7 inside Bloomingdale’s Westfield San Francisco Shopping Centre. In 2014, the 33-year-old Sydney resident went in search of the perfect purse at a Westfield mall in Bondi, a Sydney suburb. Unable to find what she was looking for, Hopkins gave up and made a detour t 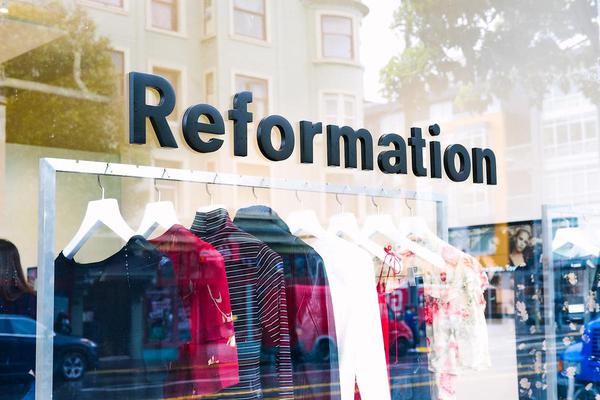 For shoppers seeking the ease of e-commerce, the feel of a designer showroom and the instant gratification of brick and mortar, the Mission District’s new Reformation boutique could be the answer. Founded as an e-commerce site in 2009 by Yael Aflalo, the ethical fast-fashion label, known for its “It Girl” following, is hoping San Francisco will be the ideal laboratory for its first tech-enabled store. “All high-volume clothing stores have very low-end experiences,” said Aflalo, 40, who manufac 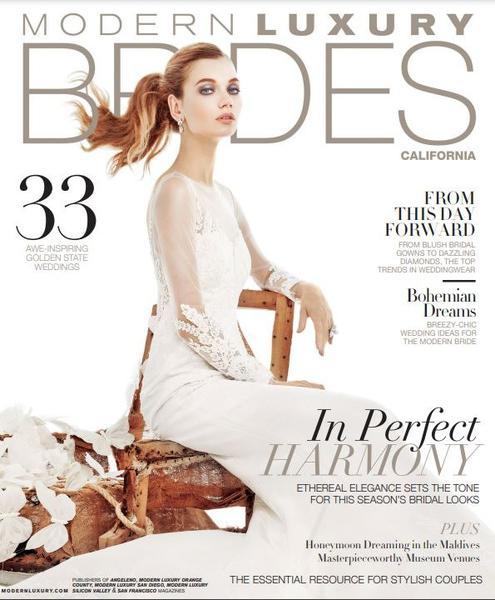 For Erich Sengelmann and Hilary DeCesare, a blind date led to a whirlwind romance, Italian-inspired nuptials and a beautifully blended modern family. WHEN ERICH and Hilary set up their rst date through a professional matchmaker, they decided on a noncommittal nightcap at San Francisco’s Clift Hotel in the case that either of them wanted to make a quick exit. Instead, three hours of rapt conversation led to their rst kiss in the ho
Load More
Close ✕